Types of Lithium-ion Batteries available in the market 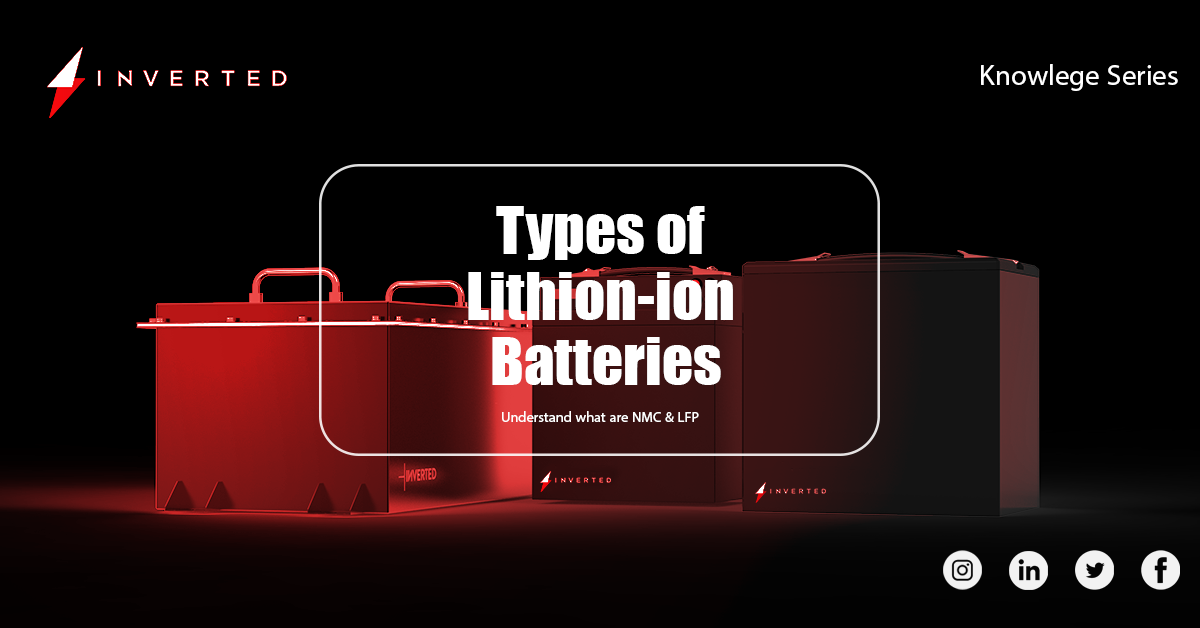 If you are new to this knowledge series then we request you to please go through the old chapters to have a better understanding of the batteries.

Lithium-ion batteries come in a variety of shapes and sizes, and not all of them are made equal. Below are descriptions of six different lithium-ion battery types, as well as their compositions and common applications.

Lithium cobalt oxide batteries are manufactured from lithium carbonate and cobalt and are also known as lithium cobaltate or lithium-ion cobalt batteries. These batteries are used in cell phones, laptops, and electronic cameras because of their high specific energy. They have a cobalt oxide cathode and a graphite carbon anode, and lithium ions migrate from the anode to the cathode during discharge, with the flow reversing when the battery is charged.

This battery has a few disadvantages, including short battery life and low specific power. We also want to let you know that these batteries are not as safe as other varieties. Despite this, they are a popular choice for cell phones and other portable electronic devices because of their properties.

High-temperature stability distinguishes lithium manganese oxide batteries from others, which are also safer than other lithium-ion battery types. As a result, they’re frequently found in medical equipment and devices, but they can also be used in power tools, electric motorcycles, and other applications. Lithium manganese oxide batteries can also be used to power laptop computers and electric vehicles.

Durability and a long lifecycle are other advantages – fully charged batteries can be kept with no effect on the battery’s overall charge life. When the lengthy battery life of Li-phosphate batteries is considered, they are frequently the most cost-effective option. The lower voltage of the lithium-phosphate battery, on the other hand, means that it has less energy than other lithium batteries.

NMC batteries, like other lithium-ion battery types, can have a high specific energy density or a high specific power. They can’t have both features, though. This battery is most commonly seen in power tools and automobile powertrains.

60% nickel, 20% manganese, and 20% cobalt are commonly the cathode combination ratios. This means that the cost of the raw material is lower than for other lithium-ion battery solutions, as cobalt may be fairly costly. Because some battery manufacturers plan to convert their battery chemistry to a larger percentage of nickel to utilize less cobalt, the price of these batteries may drop even more in the future. Because of its low self-heating rate, this battery type is often used in electric vehicles.

Although NCA batteries are not widely used in consumer electronics, they have great potential in the automobile industry. NCA batteries offer a high-energy choice with a long lifespan, but they are less safe than other lithium-ion battery types and are rather expensive. To ensure driver safety, NCA batteries must be accompanied by monitoring systems.

Finally, lithium titanate, often known as li-titanate, is a type of battery that has a growing number of uses. Because of its superior nanotechnology, the lithium-titanate battery has an extremely rapid recharge time.

Li-titanate batteries are being employed by makers of electric vehicles and bicycles, and this type of battery has the potential to be used in electric buses for public transit. However, these batteries have a lower intrinsic voltage or energy density than other lithium-ion battery types, which might cause problems when it comes to efficiently power automobiles. Despite this, lithium titanate batteries have a higher density than non-lithium-ion batteries, which is a benefit.

A cathode combination of nickel, manganese, and cobalt is one of the most successful Li-ion systems. These systems, like Li-manganese, can be modified to serve as Energy Cells or Power Cells.

NMC in a 18650 cell for moderate load conditions has a capacity of about 2,800mAh and can produce 4A to 5A; NMC in the same cell can be optimized for specific power. For example, it can have a capacity of just about 2,000mAh but can deliver a continuous discharge current of 20A.

The capacity of a silicon-based anode can be increased to 4,000mAh and beyond, but at the cost of reduced loading capability and shorter cycle life.

The combination of nickel and manganese is the key to NMC’s success. Table salt is an example of this; the major constituents, sodium, and chloride, are both harmful on their own, but when combined, they act as seasoning salt and a food preservative. Manganese has the advantage of developing a spinel structure to create low internal resistance but has low specific energy. Nickel has high specific energy but is unstable. When the metals are combined, their strengths are amplified.

For power tools, e-bikes, and other electric powertrains, NMC is the battery of choice. The cathode is commonly made up of one-third nickel, one-third manganese, and one-third cobalt, or 1-1-1. This creates a distinctive blend while also lowering the cost of raw materials due to the lower cobalt percentage. NCM, which consists of 5 parts nickel, 3 parts cobalt, and 2 parts manganese, is another excellent combination (5-3-2). It’s possible to make other combinations with different amounts of cathode materials.

To increase capacity, new electrolytes and additives are used that enable charging to 4.4V/cell and higher. There is a trend toward NMC-blended Li-ion since the system is cost-effective and provides good performance. Nickel, manganese, and cobalt are three active materials that may be easily combined to suit a wide range of automotive and energy storage systems (EES) applications that require frequent cycling. The NMC family is becoming more diverse.

Phosphate was identified as a cathode material for rechargeable lithium batteries in 1996 by the University of Texas (and other collaborators). Li-phosphate has a low resistance and strong electrochemical performance. The nano-scale phosphate cathode material allows for this. The high current rating and long cycle life, as well as strong thermal stability, increased safety, and tolerance if mistreated, are the main advantages.

Li-phosphate is more tolerant to full charge conditions and is less stressed than other lithium-ion systems if kept at high voltage for a prolonged time. As a result of the lower nominal voltage of 3.2V/cell, the specific energy is lower than that of cobalt-blended lithium-ion batteries.
Cold temperatures limit performance and excessive storage temperatures shorten service life in most batteries, and Li-phosphate is no exception. Li-phosphate batteries have a higher self-discharge than typical Li-ion batteries, which can lead to age balancing difficulties. This can be addressed by purchasing high-quality cells and/or employing sophisticated control circuits, both of which add to the pack’s cost. Manufacturing cleanliness is critical for long-term success. Moisture cannot be tolerated, or the battery will only last 50 cycles.

Each cell in a sequence of four Li-phosphate cells peaks out at 3.60V, which is the correct full-charge voltage. The charge should be removed at this point, although the topping charge continues while driving.

Li-phosphate is tolerant of moderate overcharging; however, holding the voltage at 14.40V for an extended period, as most vehicles do on a long drive, could cause Li-phosphate to become stressed. How long Li-Phosphate will last as a lead-acid replacement in a conventional vehicle charging system will be determined over time. Cold temperatures diminish Li-ion performance, which can affect cranking ability in extreme instances. 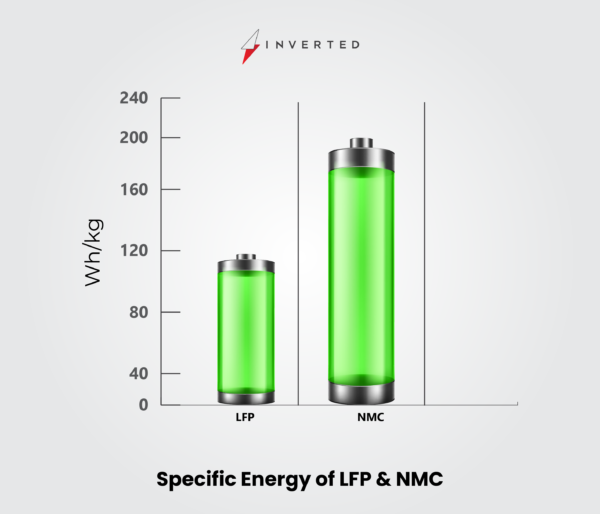 So this chapter was about the types of Lithium-ion batteries and in-depth information about the NMC & LFP batteries.

In the next chapter we will talk about the Battery Sizing which is a very important information. If you know how to do battery sizing, you can easily calculate the battery specification which your business needs.