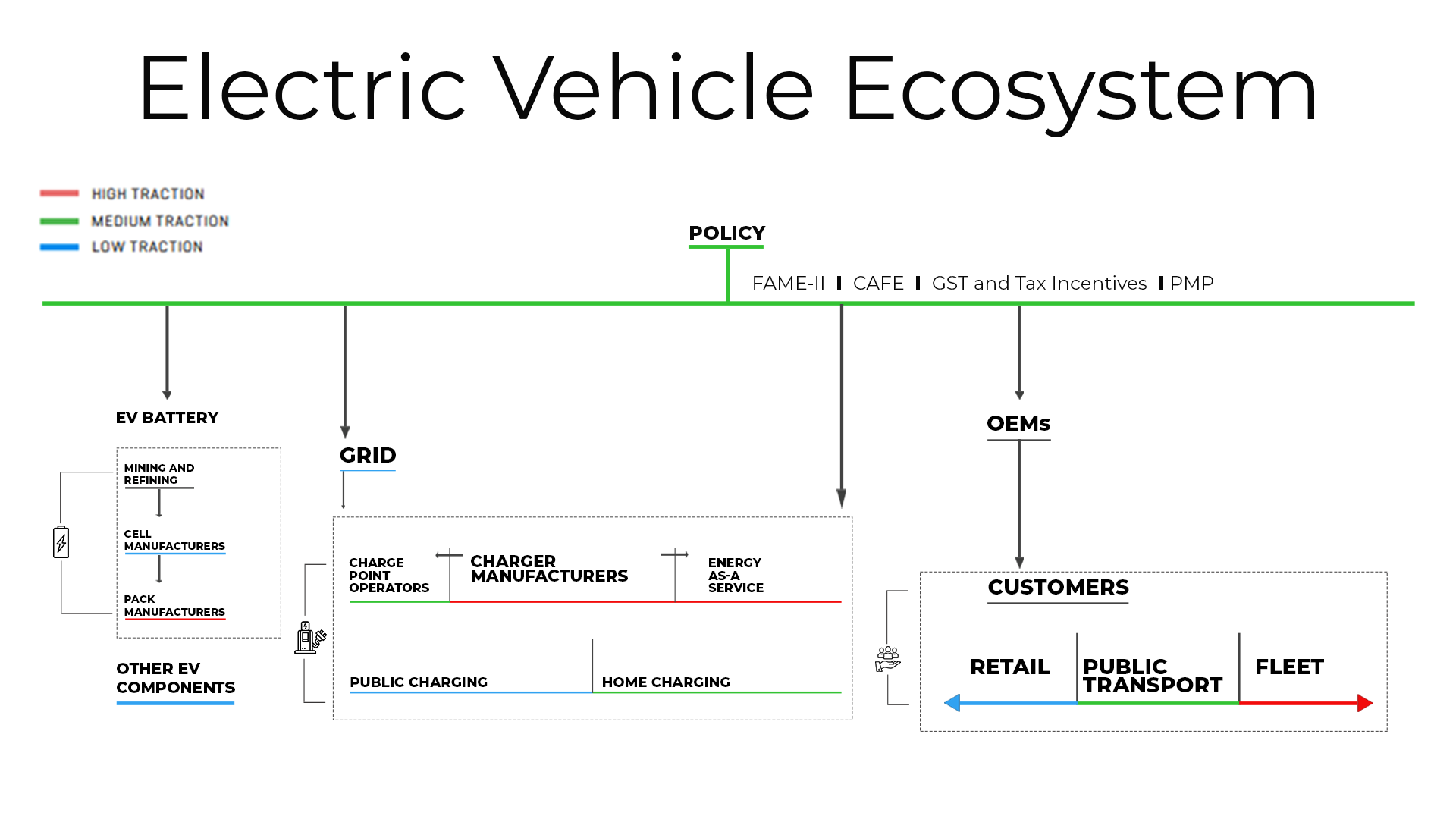 In this blog we will explore all these points.

The role of policymakers in the growth of electric vehicles is critical. With the support of its New Electric Vehicle Policy, China has taken a big lead over the rest of the globe in EV adoption.

The lack of economic parity is now a major barrier to EV adoption. Policymakers are attempting to close this gap by providing incentives to stimulate the adoption of electric vehicles. To further stimulate EV adoption, policymakers must use additional levers at the same time. The Indian government has taken a number of encouraging efforts to encourage the adoption of electric vehicles, and FAME II represents a huge step forward.

Mandatory adoption goals, localization of important components, and defined regulations and standards guidelines. EV adoption in public transport is one of the key levers that policymakers in India need to leverage.

The battery not only accounts for 30-40% of the vehicle’s cost, but it’s also the key to overcoming other issues such as range anxiety, charge time reduction, EV safety, and so on.

The availability of battery raw materials is a major roadblock for India’s electric vehicle industry. India lacks significant quantities of crucial raw minerals such as lithium and cobalt. Cell production is a high-cost, R&D-intensive process that necessitates scalability.

For the time being, India is entirely reliant on cell imports, and the domestic industry’s contribution to the battery value chain is restricted to battery pack assembly.

There are two key considerations for the grid.

While the production and transmission parts of the grid can handle the increased peak power demand brought on by EV adoption, the distribution element of the grid will need structural changes to meet peak loads at high EV adoption.

The bulk of Indian houses are linked via 200 kVA transformers, which are incapable of charging more than 20 cars at once with a 7.4 kWh AC charger. In order for EVs to truly address the pollution problem, the grid’s composition must also change toward renewables.

India’s coal-dependent grid is one of the least efficient in the world, making this transition even more critical, as inefficient fossil-fuel-based power plants also entail increased carbon emissions.

OEMs have a significant impact on the future of electric vehicles, and they are the ultimate disruptors. With the introduction of new companies and increasing action by incumbents, the 2W market has witnessed a lot of activity. In the case of 3W, the e-rick category has risen significantly, with Li-ion batteries being used more frequently.

E-cars are set to hit the market soon. Mahindra and Tata Motors, with their fleet-targeted variations, dominated the 4W market. Hyundai, MG Motors, and Tata Motors all introduced new EV models for the retail market in 2019.

The bus category of EVs is witnessing the most activity, owing to public sector demand.

In India, charging infrastructure development is still slow, owing to a lack of momentum in the uptake of electric vehicles (particularly 4Ws). Energy-as-a-service business models have emerged as innovative business models (most of them are based on battery swapping).

In the short future, home charging will be the dominant way, as public charging infrastructure develops in tandem with general EV adoption.

Finally, there’s the ecosystem’s most crucial stakeholder: the end-user. Customers require both economic fairness and a high-quality product. TCO parity is critical, and the upfront cost differential must be reduced to encourage customers to switch to electric vehicles.

Although fleets and public transportation systems are fast gaining traction, the retail customer is still a long way from adopting electric vehicles – particularly in categories where the upfront cost differential is significant.